The history of Terme di Saturnia dates back to the Etruscan era.
A local symbol is a figure of a woman which adorns the fountain in the central square of the village, representing the Etruscan goddess Aurinia. Aurinia was renamed Saturnia by the Romans in the 2nd century B.C. Signs of its past, are evident in some parts of the IV / III century B.C. citywalls, and the Roman Gate. In the nearby of the church it is still visible an ancient thermal square bath built by the Romans.
During the Middle Age, the Maremman region was repeatedly assaulted by the cities of Orvieto and Siena. Even if the local feudists had built defensive fortress, the Maremma was conquered. Nobody, in the following centuries, continued the massive drainage works started by Etruscans and Romans,till 1828 with the Duke Leopoldo II.
The Maremman region was repopulated and its inhabitants were recognize appropriate health cures. Today, turists spend their holidays in the tuscan Maremma, where to find evocative Etruscan necropolies, elegant Roman villas, mysterious medieval fortress.

It’s Legend has it that one day Saturn flew into a temper because men were always fighting against each other. He took a flash of lightning and threw it down onto the Earth, causing sulfurous and warm water to gush out from the crater of a volcano, water which wrapped and calmed everything. That comforting womb eventually gave birth to wiser and happier men. The setting of the legend is acknowledged to be the heart of the Tuscan Maremma: here, this water is still gushing out at a rate of 800 liters per second and at a temperature of 37° C. 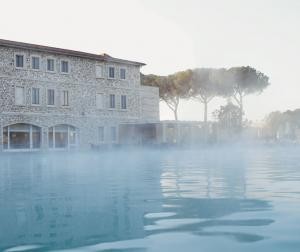 Gl facilities include the Terme di Saturnia
– A Roman bath with bio sauna,
– Turkish bath,
– Tropical showers,
– 5 swimming pools,
– A pool of ‘cold water
Pools and Spas of Saturnia, spanning 2800 square meters, and are equipped with thedromassaggi, waterfalls and vascular with hot and cold. ‘S thermal water comes from an underground aquifer that is 200 meters deep, that flows continuously at 37 ° for 3000 years by natural crater underneath the structure.
www.termedisaturnia.it

This website uses cookies to improve your experience while you navigate through the website. Out of these, the cookies that are categorized as necessary are stored on your browser as they are essential for the working of basic functionalities of the website. We also use third-party cookies that help us analyze and understand how you use this website. These cookies will be stored in your browser only with your consent. You also have the option to opt-out of these cookies. But opting out of some of these cookies may affect your browsing experience.
Necessary Always Enabled
Necessary cookies are absolutely essential for the website to function properly. This category only includes cookies that ensures basic functionalities and security features of the website. These cookies do not store any personal information.
Non-necessary
Any cookies that may not be particularly necessary for the website to function and is used specifically to collect user personal data via analytics, ads, other embedded contents are termed as non-necessary cookies. It is mandatory to procure user consent prior to running these cookies on your website.
SAVE & ACCEPT